How I got my job: Design Engineer at International Nuclear Services (INS) 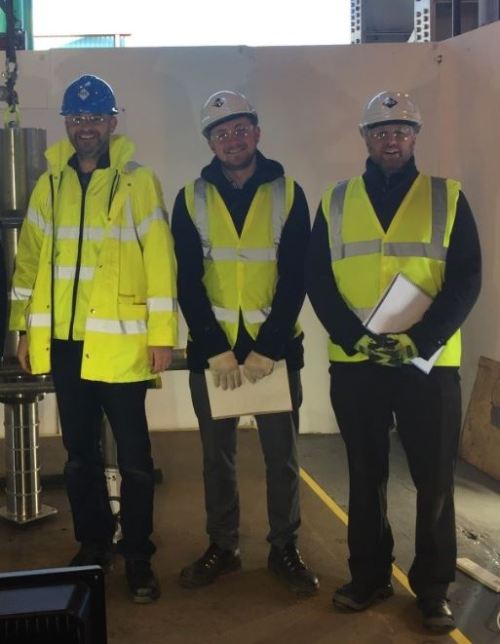 Sean Perry graduated from Leeds with a Masters in Automotive Engineering in 2012. He now works as a Design Engineer for INS, a role he secured through the nucelargraduates scheme.  In this post he outlines how he got this job and shares his advice for other students and graduates.

Within INS I act as part of a team of engineers with specialist experience in the design and licencing of Transport Packages and supporting equipment that are used to transport radioactive material around the world. My day to day tasks include; producing 3D designs using CAD packages, transforming 3D CAD models to manufacturing drawings and performing structural calculations to substantiate the designs.

How did I get here?

I graduated from Leeds with a Masters in Automotive Engineering in 2012. I had applied for a number of graduate schemes but, as I’m sure will resonate with a lot of people, I was focussed more on completing assignments/passing exams rather than applying for jobs. This meant I came out without a job lined up. After a tortuous few months working in restaurants and call centres I started to broaden my search from roles solely in the automotive industry.

When sifting through the daily job alert emails from recruitment agencies (and the Leeds University Careers Centre) I came across the nucleargraduates scheme. I was instantly interested after reading the blogs on the nucleargraduates website of previous cohorts’ experiences. When completing the application I remembered quite vividly a talk I saw delivered by a professor during my first visit to Leeds for an open day – the topic was nuclear fusion reactors and the potential this technology had to improve the energy sector, spooky. I spent a long time completing the application to the best of my abilities as the more I learnt of the scheme the more eager I became to get on.

By the time I attended the nucleargraduates assessment centre I felt like an old hand, having been on several throughout the summer. In my opinion I performed well on the first day, luckily I had several engineers interviewing me who seemed more interested in the IMechE Formula Student project I had been involved in rather than my knowledge of the nuclear industry. Despite me being stricken down with a horrific illness on the second day of the assessment centre, I was (miraculously) offered a role as a design engineer on the scheme by my sponsor company INS.

I started in January and during my 20 months on the nucleargraduates scheme I worked for 3 separate companies with different roles to try and experience different facets of the nuclear industry. The best part about the scheme however was the amount of travelling we were afforded during – I attended the ENYGF conference in Stockholm, went to Kiev (before the troubles) with a trip to Pripyat and the Chernobyl Nuclear facility thrown in and finally spent an incredible week in Berlin learning about German culture and debating their decision to move away from nuclear power.

Firstly – apply early! I’m sure it’s the main thing you are hearing from everyone but it really does work. I watched my girlfriend, house mate and 3 friends from my course all walk into jobs after graduation. Speaking from experience, I let the frustration get the better of me. This led me to rushing applications and performing poorly in interviews.

Secondly – expend your circle. I was obsessed with getting a job in the automotive industry – so much so that I turned down opportunities to interview for Design Engineer roles in other industries. I understand that everyone is different and some people have a clear idea of what they want to do after University, but if you are anything like me the path isn’t always that clear. After expanding my field of interest from purely cars I started to realise that there were countless opportunities for someone with my skill set. And the rest, as they say, is history.

My final bit of advice would be that in any application and interview you complete, just be yourself. I sit next to my boss now and he was the one who appointed me initially. He jokes that I ‘swaggered’ into the office for the follow up interview after the assessment centre, describing me as a ‘Manc wideboy’. I’m guessing that my character may not work with everyone but I guess he saw something he liked and knew would work in his team. There is no point putting up a façade and pretending to be something that you think the interviewer wants to see as it could end with you working in a team that doesn’t suit you. You spend an awful lot of time with the people you work with; it helps if you are happy sitting with them every day.

Remember that we are here to help you with all things career-related, either during or after your time at Leeds. Find out more about how we can help you.

Filed under Advice, How I got my job

This site uses Akismet to reduce spam. Learn how your comment data is processed.